If you visit Cusco, Peru, the monumental stonework of the Inka capital will give you a sense of the Inka's imperial ambition. If you come to the National Museum of the American Indian in Washington, D.C., the exhibition The Great Inka Road: Engineering an Empire will show you how the architecture of Cusco reflects the empire's understanding of the Andean environment and principles of construction, as well as political administration.

But what if you never travel to Peru or Washington? You can visit the exhibition website in English and Spanish or read the companion book of essays. Or, for the first time for this museum, you can experiment with a set of three-dimensional digital models of sites in Cusco, created by the 3D staff of the Smithsonian’s Digitization Program Office.

The Cusco models are part of a much larger effort to make the research and collections of the Smithsonian Institution more widely accessible. The institution houses more than 138 million objects, artworks, and scientific specimens. At any given time, less than one percent of these objects are on display. Working with the Smithsonian’s 19 museums, nine research centers, and National Zoo to prioritize material for digitization, the Digital Program Office has set a goal of making ten percent of the collections available online, primarily as two-dimensional digital images. Smithsonian X 3D is targeting far fewer objects. But with web browsers now capable of supporting 3D imagery through webGL, Smithsonian X 3D is breaking new ground.

The Smithsonian X 3D website includes models, as well as a gallery of behind-the-scenes videos about 3D technology in a museum and science setting. Smithsonian X 3D's Inka Road page houses 3D images of stonework from five sites around Cusco, with notes and videos keyed to details of each site and, for Saqsaywaman, a brief tour:

Waka Pachatusan, a sacred site near Cusco on the road to the province of Antisuyu:

A section of Inka stonework along Hatunrumiyoc Street, including the 12-angled stone that epitomizes Inka dry-stone masonry: 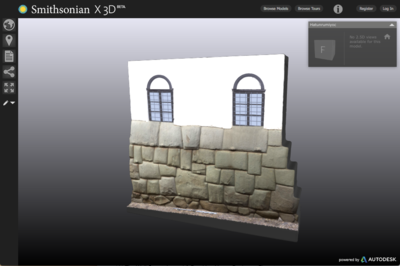 A section of the original wall of the Qorikancha, the religious center of the empire: 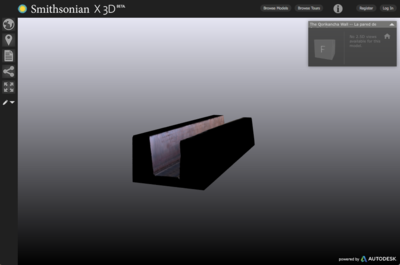 A section of wall at Saqsaywaman, the temple of the sun in upper Cusco: 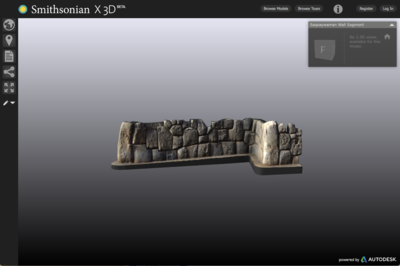 And an Inka double-jamb doorway, one of three still standing: 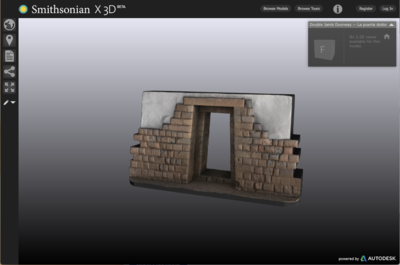 To create these models, Smithsonian 3D digitization specialist Jon Blundell joined the museum’s Inka Road project team in Cusco during the summer of 2014. Dr. Ramiro Matos (Quechua), an Andean archaeologist and co-curator of The Great Inka Road, and consulting scholars and other museum specialists on the project team worked with Jon to identify sites around the city for 3D imaging. This was the museum’s first use of 3D scanning technology. “Identifying sites was collaborative,” Jon says. “The team knew that 3D scanning was a tool they wanted to deploy to tell the story. It was interesting to work with them to figure out, What is here that would be compelling as a 3D model, could be captured in the time we have, and has a story behind it?” Once the team had selected the sites, Jon used a combination of laser scanning and photogrammetry—a technique that uses digital cameras and specialized software to create 3D data—to record the surface of each site as billions of 3D data points. 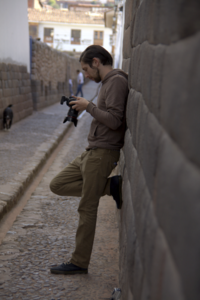 The Smithsonian X 3D team has digitized other large sites—colonial church burials in Jamestown, Virginia, and a field of fossil whales uncovered at Cerro Ballena, Chile—but working in an urban setting presented different challenges. The City of Cusco provided extraordinary access to the places chosen for scanning, allowing the project team to use the streets at the three in-town sites for long periods of time. The manager of the Saqsaywaman Archaeological Park opened the site at sunrise, long before tourists would arrive, so that Jon and his assistants could collected 3D data, and  other members of the project team could film interviews with scholars consulting on the project. And the owner of the modern hotel that uses the Inka double-jamb door as an entranceway graciously let the Smithsonian include that site in the project.

Back at the Smithsonian, Jon used software to layer the information he had captured in the field and build each 3D model. He began by creating a point cloud. Vince Rossi, a program officer on the 3D staff, describes the data behind the point cloud as essentially a text file with XYZ values for each data point. This durable information will remain useful even as the museum community establishes new standards for archiving data and as software developers write new algorithms to make sense of it.

The next refinement was to create a black-and-white 3D surface model for each site from its point cloud; laser scanning and photogrammetry geometry data was combined to produce high-resolution geometry using the strengths of each capture method. Next the photogrammetry data was used to projected color onto the geometry. The result is geometrically detailed, accurately colored models. In Cusco, Jon recorded perhaps 40 to 100 gigabytes of raw data for each site. Before posting the models on Smithsonian X 3D, he used techniques developed for digital animators to compress the data and create 3D models that maintain visual fidelity, yet can be downloaded quickly even on mobile devices.

“That’s what our office does,” Vince explains. “We’re not inventing new technology. We’re leveraging tools that were developed for other industries and developing workflows—the nitty-gritty process of collecting the data and putting together the tool chain that gives us the products the Smithsonian needs. We’re using existing tools in new ways.”

The Smithsonian X 3D staff compares 3D on the web today to video a handful of years ago. Museums have long had the technology to scan objects in three dimensions at very high resolution. But the ability to deliver 3D content directly to people online, without requiring viewers to download browser plug-ins, is a recent development. People can also download 3D data from the Smithsonian X 3D website, then visualize it in their own software or use it for their own scientific or creative projects, under the Smithsonian terms of use. “That’s more of an experiment,” Vince says. “We’ve already seen people do exciting things—teachers in the classroom creating 3D prints. More and more public libraries have 3D printers.”

3D-printed Hatunrumiyoc puzzles aside (yes, Jon, Vince, and the third member of the 3D staff, Adam Metallo, have made them), what does 3D imaging bring to Smithsonian research? It provides scientists with new tools to document fieldwork and gives conservators a fast, accurate way to record and compare the condition of objects in the collections. It also enables researchers, and the rest of us, to do things that are impossible to do with actual museum objects.

To get a glimpse of what that can mean, we have to leave Cusco and look at the 3D model of the Cosmological Buddha. Keith Wilson, a curator at the Freer and Sackler Galleries, the Smithsonian’s museum of Asian art, explains in one of the tours that accompany the model, what distinguished this sculpture are the narrative scenes that completely cover the monk’s robe. On the Smithsonian X 3D site, we can turn the sculpture around to have a 360-degree view or look at a flat map of the carvings, but that’s just the start.

“Nothing replaces the experience of seeing the sculpture in the gallery at the Freer–Sackler,” Vince says. “But if we go under the hood and turn off the color, that does interesting things, because the color of the stone was interfering with seeing the geometry of the surface. We can further bring out the geometric detail using an ambient occlusion map, which essentially darkens areas of high curvature and lighten areas of low curvature. We can adjust detail live in the browser. All of a sudden we’re better able to get a much better idea of the carving. This is still an accurate representation of the sculpture. It’s just a different way to visualize what’s really there.” 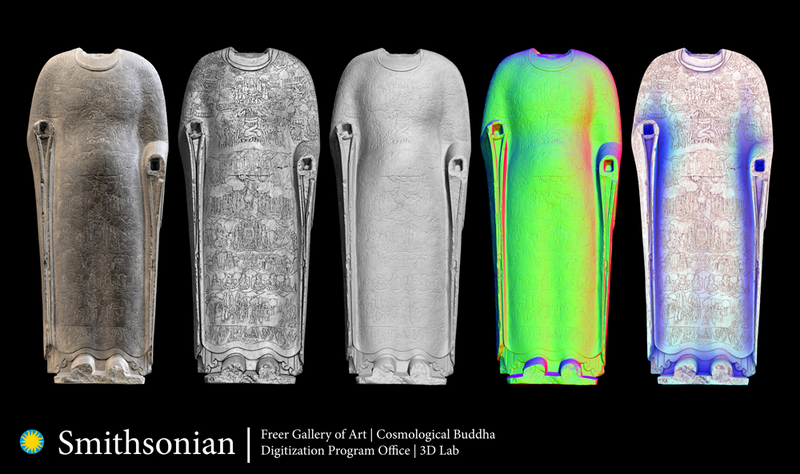 This poster, which is available in large format (500 MB file) via the SI X 3D Download webpage (free and open to the public with registration), shows the components of the digital model of the Cosmological Buddha. From left to right: Photo texture, composite occlusion (note how the surface carvings stand out), geometry, normal map, and individual occlusion channels. A print-ready model of the sculpture in low, medium, and high resolution is downloadable from the same site.

“If we back up and look at 3D technology, it’s really nothing more than a form of measurement. We’ve been able to measure things for thousands of years. If we look at the way research at museums is generally conducted, it has included very accurate point-to-point measurement of landmark points on an object or specimen. With a 3D scan, we’re able to replace those few dozen measurements with tens of millions of data points. We’re able to provide whole new tools to researchers and open up a whole new world of investigation. By putting these models online, we’re also opening that world to the public.”

(This story has been reposted here with permission from our friends at the National Museum of the American Indian.)

The Great Inka Road: Engineering an Empire is on view at the National Museum of the American Indian in Washington, D.C., through June 1, 2018.