The first presidential portraits created from 3-D scan data are now on display in the Smithsonian Castle. The portraits of President Barack Obama were created based on data collected by a Smithsonian-led team of 3-D digital imaging specialists and include a digital and 3-D printed bust and life mask. A new video released today by the White House (and shown below) details the behind-the-scenes process of scanning, creating and printing the historic portraits. The portraits will be on view in the Commons gallery of the Castle starting today, Dec. 2, through Dec. 31. The portraits were previously displayed at the White House Maker Faire June 18.

Two years ago, Adam Metallo and Vincent Rossi created a vision document titled “Next Generation 3D Portraiture: A Digital Life Mask of President Obama.” One year ago, the White House Office of Science and Technology Policy (OSTP) first heard about this gleam in our eye, and the Smithsonian’s new Presidential Innovation Fellow Diego Mayer-Cantu became our advocate. Six months later, in the State Dining Room of the White House, a Smithsonian-led team created the first 3D portrait of a United States President.

People have always sought to document their leaders with the best technology available in their time, and the Smithsonian collects the results of these efforts as bust, paintings and photographs in the National Portrait Gallery. We think that this 3D Portrait will add a new genre to the ever-evolving modalities for presidential portraiture. One of the inspirations for the project were the compelling Lincoln life masks we scanned for Smithsonian X 3D.  Created in 1860 and 1865, they capture President Lincoln one year before he took office, and two months before his assassination. The marked changes in the President's facial features speak volumes about the anguish and horror of the Civil War, and connect us back in a profound way to the President’s life and times, as well as his legacy.

For the 1865 life mask, created in the White House, scholars believe that President Lincoln’s face and beard were greased before applying a thin coat of plaster paste. The President breathed through straws in his nostrils while the plaster dried.

For the first stage of the Obama 3D portrait, we were very fortunate to partner with the University of Southern California’s Institute for Creative Technologies. Just in time for the portrait, Dr. Paul Debevec’s team assembled a Mobile Light Stage – in essence, eight high-end DSLRs and 50 light sources mounted in a futuristic-looking quarter-circle of aluminum scaffolding. During a facial scan, the cameras capture 10 photographs each under different lighting conditions for a total of 80 photographs. All of this happens in a single second. Afterwards, sophisticated algorithms process this data into high-resolution 3D models. The Light Stage captured the President’s facial features from ear to ear, similar to the 1860 Lincoln life mask. 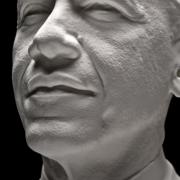 Since our stated goal was to produce a full bust of President Obama, we augmented the Light Stage technology with an additional process to capture the top and the back of the head, as well as part of the torso. For the second stage of the portrait, we asked the President to sit still while Adam and Vince circled him with hand-held scanners. These scanners capture video of a pattern of light which deforms when it is projected on a subject. Based on the deformation, algorithms reconstruct this data into color 3D geometry. As Adam and Vince proceeded with the scan, those of us in the room could see the image emerging on the laptops tethered to the scanners. Last but not least, a round of hand-held photography ensured that detail that is difficult to resolve for the hand-held scanners would not be lost.

While it took 15 minutes for the plaster to dry on President Lincoln’s face, it only took our team a little over 7 minutes from the time President Obama entered the room to finish the data capture for the first presidential 3D Portrait using 21st century technology.

And that is when our work began in earnest. The team huddled all-night in a pad-locked conference room to transfer data from memory cards to processing stations, evaluate the data, and start preliminary post-processing. Imagine the relief in the room when our initial hunch that all data had been optimally captured turned into certainty as more files were assessed, and big smiles broke out on people’s faces.

The next day, we transferred the first batch of data to Autodesk, where under extraordinary time constraints, the light stage, hand scanned and photographic data were combined and post-processed. The Autodesk team put together a 3D model by fitting together the different pieces like a puzzle: they precisely registered the geometries from the different data sources into a unified 3D space, and normalized the color information from each scan to prevent visible seams of different types of color in the final model. Last but not least, a digital sculptor added a plinth to complete the bust. Within 72 hours, the process resulted in a master file of 15 million triangles, which yielded print-ready files for an Obama bust and a life mask, as well as photorealistic 3D models for digital viewing.

Two days later, we transferred the files for 3D printing to 3D Systems. For the 1:1 bust, in a process called Selective Laser Sintering (SLS), a laser melted nylon powder into a highly accurate and durable print. Given the size of print (the bust stands 19 inches tall, and weighs almost 13 pounds), the printing process took 42 hours, after which the print cooled down for 24 hours. Vincent Rossi and I picked up the print at a 3D Systems facility in Langhorne, PA on the evening of Tuesday, June 17th, just in time for the White House Maker Faire.

And the rest, as they say, is history. We unveiled prints from the presidential 3D portrait on June 18th at the White House Maker Faire, and are looking forward to making them part of the Smithsonian’s National Portrait Gallery collection, alongside the raw data from the scanning session.

The Lincoln life masks which inspired the presidential portrait bridge the 150 years from the present to the life and times of the 16th President of the United States. In his face, we see reflected the history the President shaped and witnessed. At the Smithsonian, taking the long view is a way of life as we strive preserve the artifacts testifying to our history, art and culture. We hope that decades and centuries from today, the 3D portrait of the 44th President will speak to future generations in the same way that Lincoln’s life masks speak to us today.

The Smithsonian would like to extend a special thank you to Autodesk and 3D Systems for their generous in-kind support of this project.