Take a Virtual Dive Through a Bustling Coral Reef

The Smithsonian, The Hydrous, and Adobe have teamed up to build an educational, interactive Augmented Reality (AR) experience, exploring the ocean’s coral reefs, and the threats that they face. This immersive, free educational experience is available via the Adobe Aero app.

To view in mobile AR you will need the Adobe Aero app downloaded on your iOS mobile device, or the Aero Player is now available in beta for some Android devices. We recommend iOS 8S and above, and a selected Android device. The experience may take a few seconds to load.

This project blossomed from a 2018 collaboration between the Smithsonian’s Digitization Program Office, the National Museum of Natural History, and The Hydrous to digitize and create rich educational experiences for 90 coral type specimens. What is a type specimen? In taxonomy, the type specimen serves as the scientific name-bearing representative for any animal or plant species. That means these specimens are ideal representations of their species and are invaluable to research.

All of the 3D models from this collaboration are downloadable and usable for any purpose thanks to Smithsonian Open Access! Download the models yourself at 3D.si.edu/corals. The purpose of this previous project is to make ecosystems and collections more available and visible, and to preserve these type specimens digitally for future generations to research and learn. 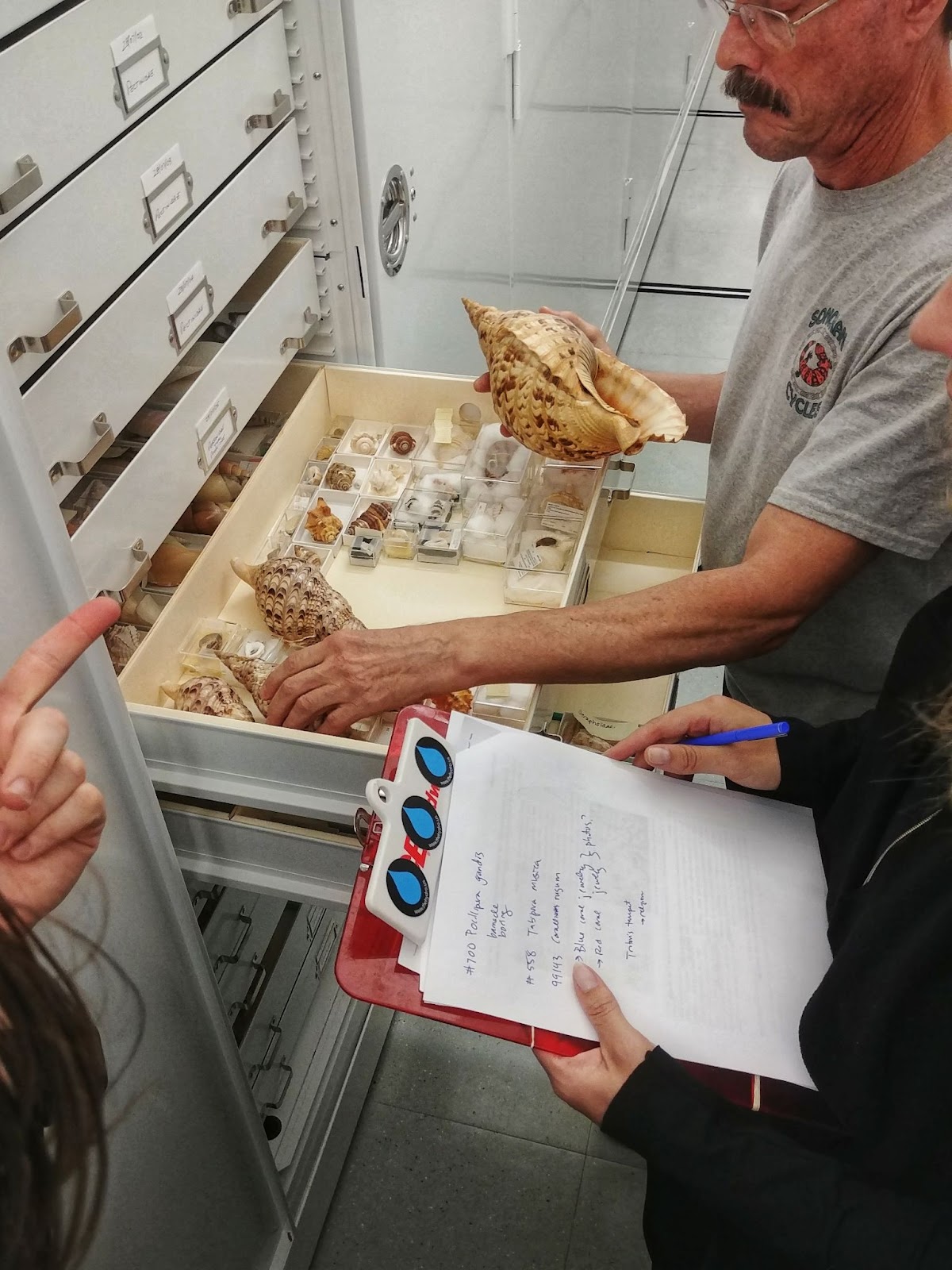 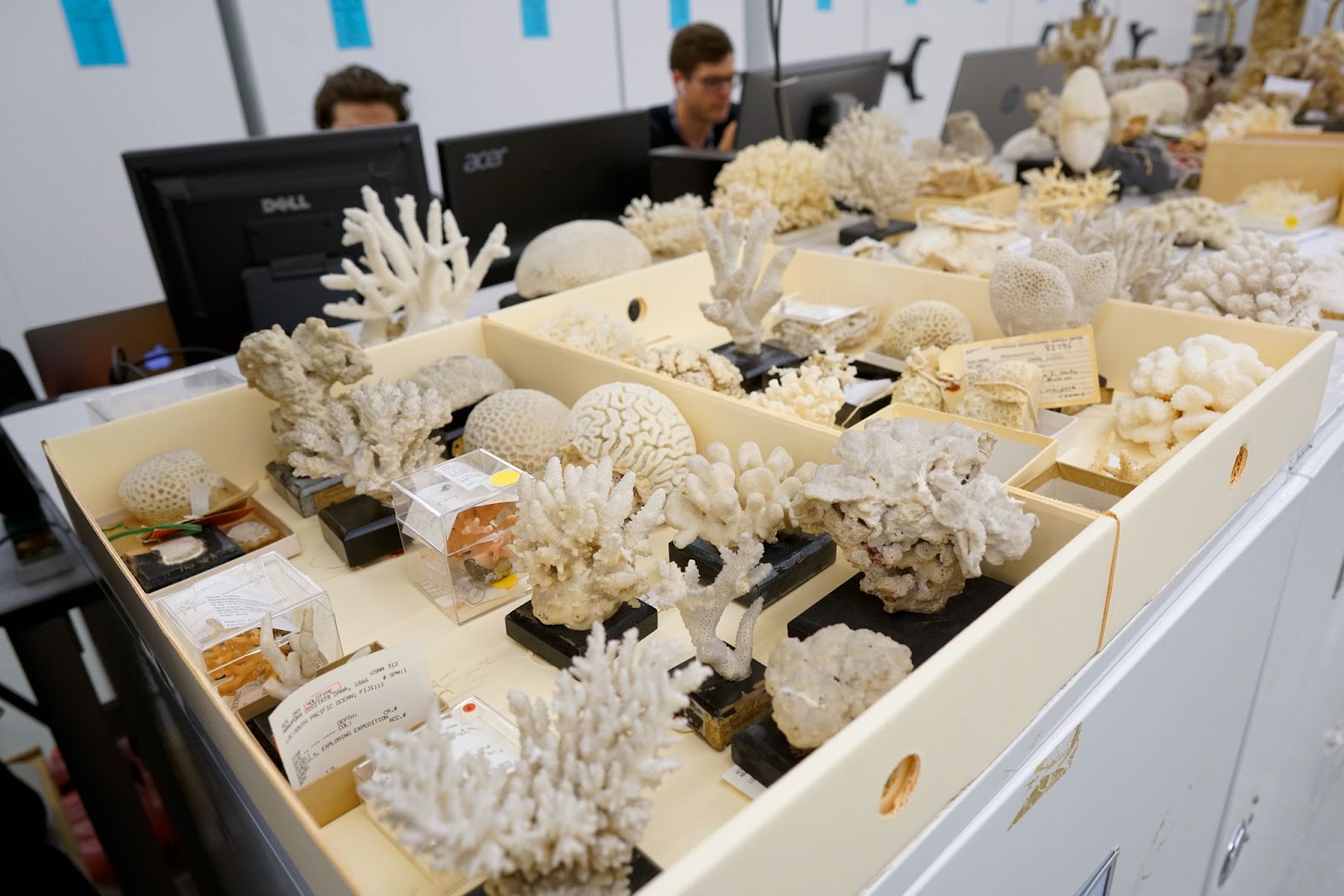 (Image 1, man reaching in to collections drawer and removing shell specimens. Image 2, dozens of coral specimens lines up in archival bins on a table top.)

To make AR Reef happen, many groups came together and offered their expertise and passion for ocean conservation. The Smithsonian opened up our incredible 3D collection of coral specimens from the Invertebrate Zoology department of the National Museum of Natural History. The Hydrous then stepped in - Chief Scientist Dr. Erika Woolsey worked with her team, including Science Advisor Celine de Jong, to build an engaging, science-based story. Then Adobe brought it all to life in Adobe Aero with a creative augmented reality toolkit. Ocean advocate and citizen scientist Danni Washington then came on board to narrate the story.

To capture these fragile and invaluable specimens, we set up 3 capture stations inside the Invertebrate Zoology collections storage rooms within the museum. It took 6 museum staff, including capture technicians and object handlers, 80 hours of work to capture all 90 specimens. These stark white corals posed challenges to 3D capture because they are so fragile and have very intricate and overlapping details. We designed custom capture stations to minimize object handling and get the best resolution data possible.

Station 1- The main capture station was a semi-automated turntable setup with a 4 camera array and used a process called photogrammetry. Photogrammetry is a technique that uses comprehensive photography of an object to create a 3D model. The cameras all trigger at once, capturing 4 images at different heights, and then the table rotates a few degrees and the process repeats. With the object only needing to be set down and then flipped once, we were able to use this system to safely capture one specimen every 30 minutes. 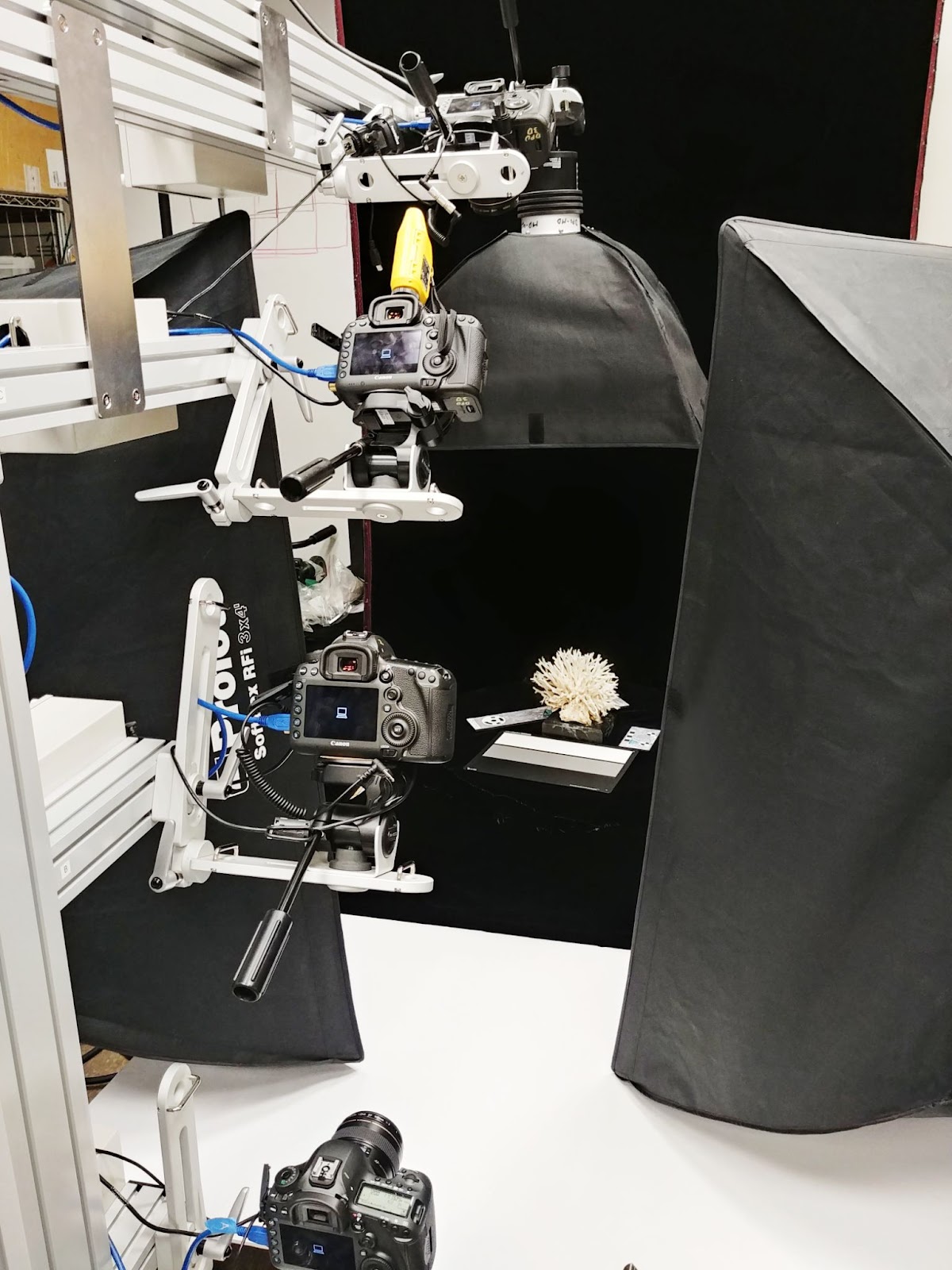 (Image, 4 cameras in an arch pointed at a coral specimen on turntable with a black backdrop)

Station 2- A secondary station was made for hand-held photogrammetry of objects that were too large to fit on the turntable. The capture technician would take photographs around the coral and at every angle they could see with their eyes, including deep into crevices. This was a much slower process and was used only when necessary. 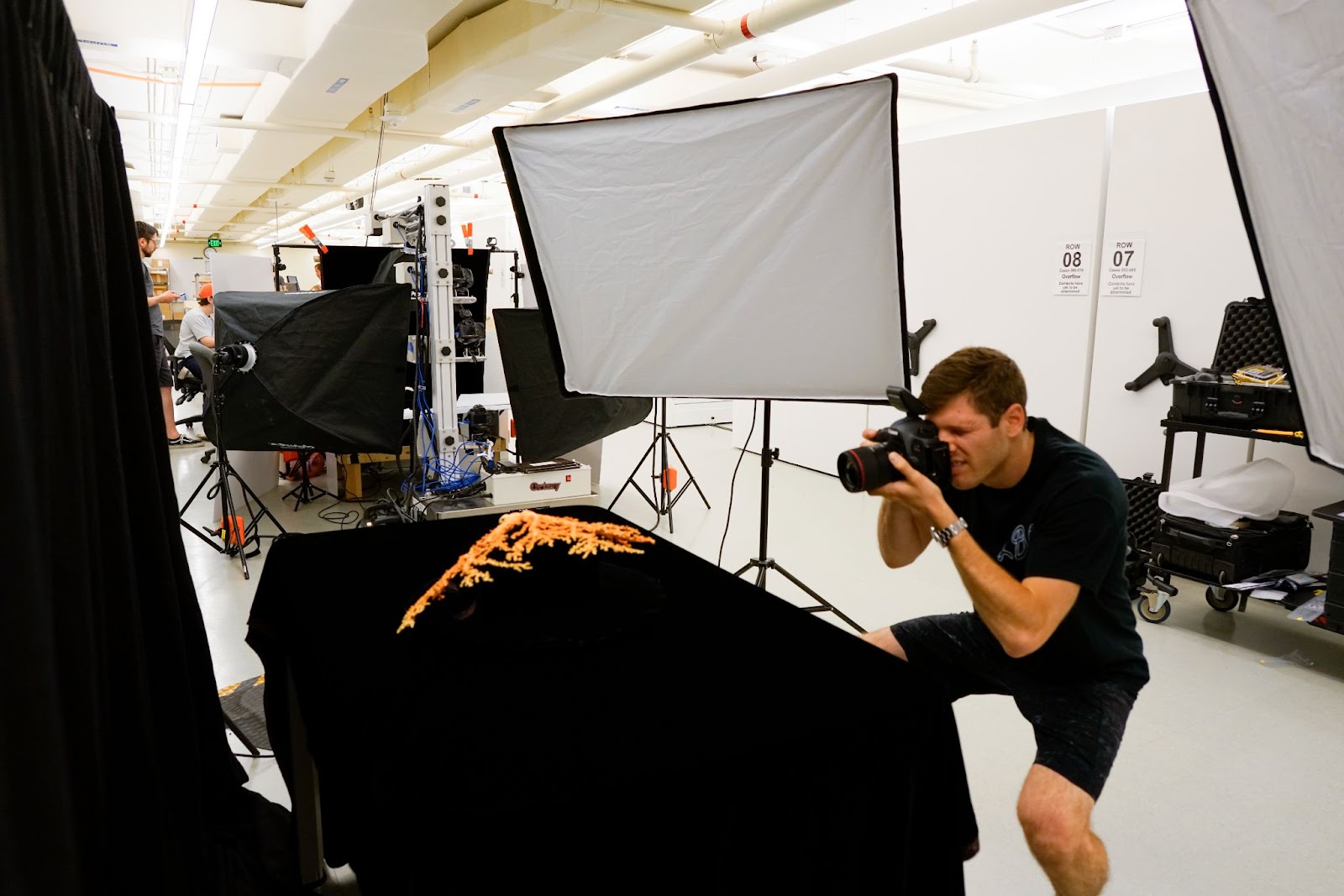 (Image, Man holding camera pointed at a large coral on a black table)

Station 3- The final station was a macro structured light scanner used to capture high detail of small sections of some of the corals. This was used for specimens who had remarkable fine detail and produced high resolution, small 3D models of just the surface features of the specimen. 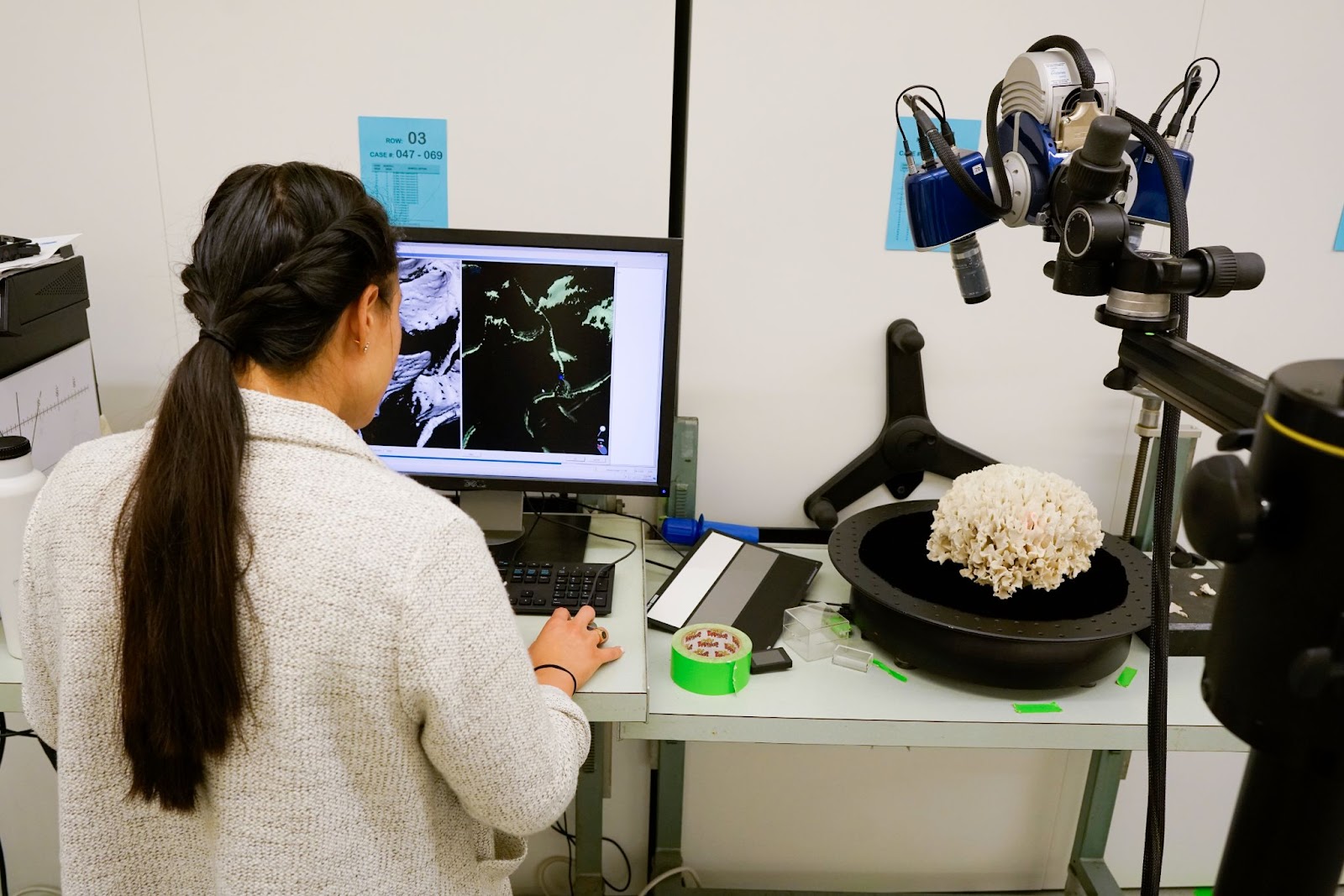 (Image, Woman standing at computer next to a coral on a pedestal with a 3D scanner above it, pointed downward)